DCA is a substance that has been used for many years as an investigational drug to treat children with inborn errors of mitochondrial metabolism, including congenital lactic acidosis, caused by pyruvate dehydrogenase complex (PDC) deficiency. DCA was discovered to be a safe drug with no cardiac, pulmonary, renal or bone marrow toxicity. The most serious common side effect is peripheral neuropathy, which is reversible upon decreasing the dose or stopping DCA.

DCA has been investigated as a novel metabolic therapy for various cancers since 2007 when Bonnet et al published a combined in vitro/in vivo rat study demonstrating the efficacy of DCA in treating human lung, breast and brain cancers by inhibition of mitochondrial pyruvate dehydrogenase kinase.

In the initial 2007 paper by Bonnet et al, it was reported that DCA reduced mitochondrial membrane potential resulting in selective apoptosis in cancer cells. The mechanism identified was inhibition of aerobic glycolysis (the Warburg effect) and activation of mitochondrial potassium ion channels. Further investigation of DCA confirmed anti-cancer activity in several cancer types including colon, prostate, ovarian, neuroblastoma, lung carcinoid, cervical, endometrial, cholangiocarcinoma, sarcoma, and T-cell lymphoma. Other antineoplastic actions of DCA have also been suggested, including angiogenesis blockade, changes in expression of HIF1-α, alteration of pH regulators V-ATPase and MCT1, and other cell survival regulators such as PUMA, GLUT1, Bcl2 and p53.

Clinical observation of more than 300 advanced-cancer patients treated with an oral regimen of DCA revealed that 60% to 70% exhibited measurable benefits. Currently, there is an ongoing phase I trial of oral DCA for recurrent or metastatic solid tumors at the University of Alberta and 2 trials of oral DCA for head and neck cancers are also ongoing at Stanford University.

The intravenous route of administration of DCA has multiple therapeutic advantages, including higher blood levels because pulsed IV dosing can achieve a higher concentration than is feasible with an oral dosage, a longer washout period to reduce the potential for neurotoxicity, and a bypassing of the digestive system, which is particularly significant for advanced-stage cancer patients. Data were available on high dose, IV DCA up to 100 mg/kg/dose that have confirmed its safety, both in healthy volunteers and in critically ill patients.

The pictorial presentation below describes perhaps the primary mechanism through which DCA decreases cancer proliferation, which is through inhibition of pyruvate dehydrogenase kinase (this will be explained in further detail below). Many cancer/cancer cells prefer to utilize glucose and process the glucose using glycolysis, while abstaining from the use of mitochondrial oxidative phosphorylation. In these cancer cells, pyruvate, being the final metabolite of glycolysis, is then converted to lactate, by lactate dehydrogenase.

The conversion of pyruvate to lactate, instead of conversion to acetyl CoA, is the key step that causes the cancer to become resistant and aggressive (See pictorial below).

This "key step," causes the following:

Summary of Pictorial Below: 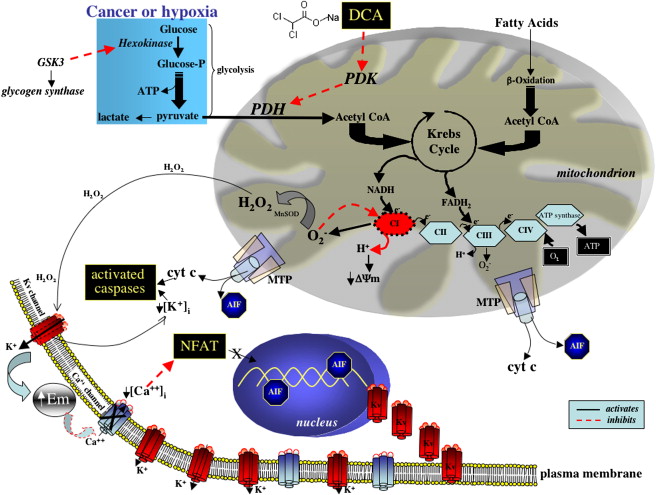